The other day I noticed that someone found my blog by searching “necklace heart shaped pendant fuck you.” Obviously not a Titanic fan.

That got me wondering how other people stumble across this dusty corner of the Internet.

It seems that the majority of people come her with some variation on Swamplandia! and the meaning of the red Seth, so I hope my little essay helps them find some meaning in that complicated symbol. However, two people searched “gator hat dollar tree.” Just because it cost a dollar, doesn’t mean it isn’t fabulous.

Many people get here searching “sesame street book club” or some variation thereof. Now, I know they’re (probably) searching for the series of books that Don’t Forget the Oatmeal was a part of, but I can’t help picture a circle of adults sitting around and having a serious discussion of Ernie Gets Lost. This would either be the most boring book club, or the best book club ever. I’m not sure yet.

The one that made me LOL: “What to do to a pigeon with indigestion?” This probably led some disappointed bird lover to my review of The Pigeon Pie Mystery. (Or maybe Ernie Gets Lost, which features the classic board game Pigeon Land. Who knew I had two tangentially pigeon-related posts?) What I want to know: How would you even know your pigeon had indigestion? And what do you do about it? Pepto-Bismol coated birdseed?

Finally, one person got here by searching “I hate children.” I’m not sure where on my blog this search term leads, but I just have to say, me too. Me too. You’re welcome here.

Please let me know, how did you first find me? 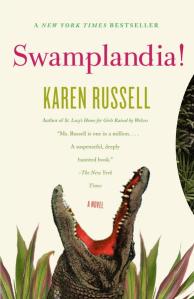 Don't judge a book by its cover.

Our book club recently finished Swamplandia! by Karen Russell. The marketing surrounding this book is very misleading. Blurbs by Entertainment Weekly and Carl Hiaasen lead you to believe that you’re in for a wacky, fun-filled ride. This is true, but you’re also destined for a total kick in the nards of your soul.

A few of us found that Ava’s loss of the Red Seth to be one of the saddest moments of the novel. (As a sidenote, I don’t know if red alligators actually exist. This is important.) The Red Seth is, at its core, a symbol of innocence. At first, it seems like it might be representative of blossoming sexuality. It is red, after all. Plus, it’s “A tiny, fiery Seth.” (59), and the discovery of it is thrilling. The whole budding sexuality thing is more of a theme in the short story “Ava Wrestles the Alligator.” In Swamplandia! the red Seth ultimately symbolizes a child-like innocence. This is apparent when Ava throws it at the Bird Man in order to escape after she’s been raped by him. 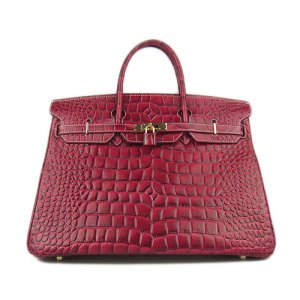 Doing a google image search for "red alligator" only brings up pictures of hideous handbags and shoes.

The Seth is then lost forever. There’s no way for it to survive in the wild. As Ava says when she first discovers it, “I felt very certain that she was going to die. That nothing born this color could live for long in the open air.” (60)

That’s sad enough, but the meaning of the red Seth goes deeper than this. With the red Seth, Karen Russell suggests that innocence shouldn’t even exist. “The red on her skin seemed like a disease I could contract through my fingertips or a spell I could break, a color so pure and unreal that I thought it might rub off.” (59) It’s so fragile, there’s no place for it in the world.

Innocence’s ignorant bedfellow is hope. The two go hand in hand. “This alligator could save our park!” (60) Ava believes when she discovers the tiny red Seth hatching from an egg. She’s too young and ignorant to knwow any better. Nothing will save Swamplandia! from its fate. And as her mom suggests while in the hospital, it’s pointless to hope. “Hopes were wallflowers. Hopes hugged the perimeter of a dance floor in your brain, tuging at their party lace, all perfume and hems and doomed expectation.” (106) What do your hopes get you? Cancer and death. 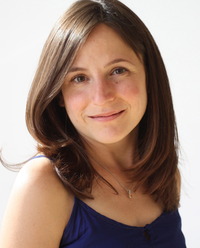 Eventually innocence is lost. It’s not just lost, you have to throw it away to defend yourself. And ultimately, after a while, you completely forget what innocence was even like: “When I’m awake, I can’t seem to draw a stable picture of the red Seth in my mind’s eye anymore–it feels like trying to light a candle on a rainy night, your hands cupped and your cheeks puffed and the whole we world conspiring to snatch the flame away from you. But in a dream I might get to see the part of the swamp where her body washed up, bloated and rippling, or where she escaped to, if the dream was beautiful.” (396)

Because of the Red Seth, I found Swamplandia! a deeply cynical novel. This isn’t a criticism. I’m a cynical person. Maybe it’s just my general mood lately, but I’ve been ruminating on this aspect of Swamplandia for a while, and I have to say I agree with it. And that makes me immensely sad.