Mega Man is one of the most nostalgic characters for me. As a kid in the late 1980s, I played Mega Man 2 all the time. I watched the Saturday morning cartoon Captain N: The Game Master, which featured Mega Man as a character. And I’d squeeze my little hand into a Styrofoam cup, pretending it was my mega buster and I was Mega Man. I did this in public.

I never found it odd that I didn’t know what Mega Man really looked like. His appearance differed depending on where he was, whether it was in his game games, promotional artwork, or television.On the notoriously bad box art for the U.S. edition of Mega Man 2, the blue bomber looked like this:

In the Captain N TV show, the blue bomber looked like this: 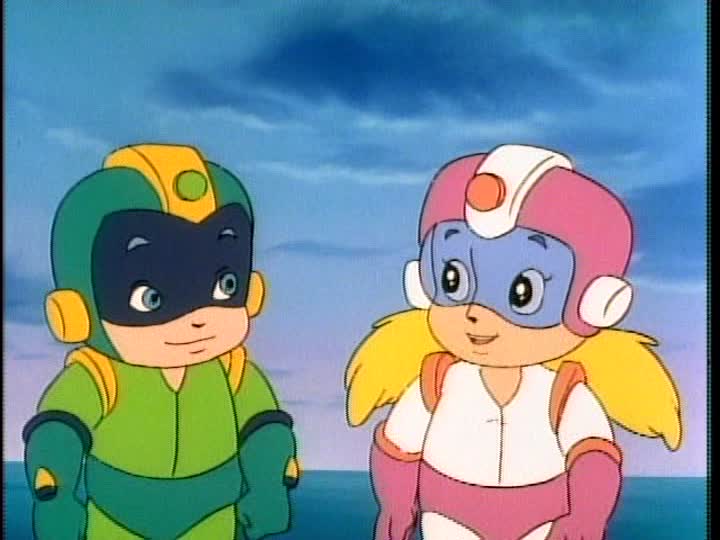 Mega Man is on the left, which I feel like I should specify, since neither of these characters are blue, which is Mega Man’s defining charactertistic.

And in the title sequence to Mega Man 2, one of the best openings in games of any generation, Mega Man looked like this:

He has hair under his helmet. No wonder people were confused. He’s supposed to be a robot, but he has hair? Where does the robot begin and the armor begin? Ex Machina this isn’t, but it was still a dilemma.

There has never really been a standardized image of Mega Man.Mario, he always looks the same, at least since around Super Mario Bros. 3. Before that, Mario artwork was also scattershot as Nintendo struggled to translate him from a few pixels into more detailed artwork. Mario looks very different depending on the media. He appeared as strangely super-deformed in Mario Bros. and Donkey Kong games. He became more brighly colored in the Super Mario Bros. era, but he still looked weird, and Princess Toadstool, as she was then known, was oddly tiny. Mario even looked like both Captain Lou Albano and Bob Hoskins. But eventually Nintendo decided to standarize Mario, and we all know what he looks like. Even in 3D, Mario basically looks the same.

Mega Man first came closest to his most current look with Mega Man 8 in the U.S. Up until that point, his U.S. box art had improved from the bad MM2 rendition, where he appears to be a man in tights holding a squirt gun. But his face was still off, strange and impish, like Warwick Davis’s Leprechaun in a power suit. 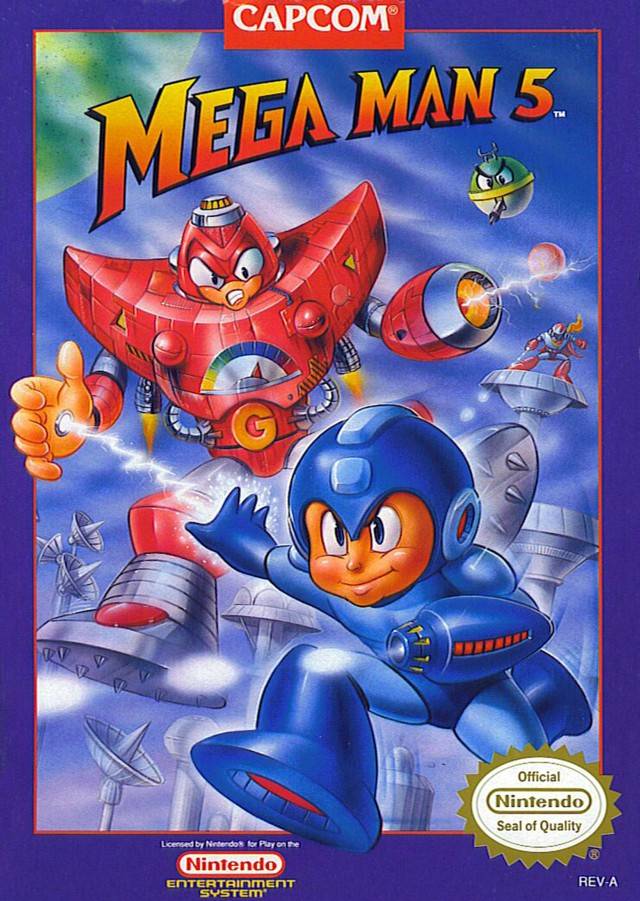 In Japan, Mega Man always had a very anime look, appearing more like Astro Boy early on, and getting more detailed over the years. He started to look closest to his modern appearance in Mega Man 6 in Japan.

There hasn’t been a new main-series Mega Man game in almost six years, but Mega Man feels more ubiquitous than ever, and it’s easy to forget the confusion over his actual appearance. His inclusion in Super Smash Bros. for Wii U was really exciting for me, mainly because of the amiibo offered for him, which also allows you to race with a Mega Man helmet on in Mario Kart 8.

There are now different versions of Mega Man, although each one has standardized artwork, now the norm in contrast from the wild west of the 1980s. We have Mega Man, Mega Man X, MegaMan.exe, Star Force Mega Man and MegaMan Volnutt (from Mega Man Legends), who disregards all helmet laws. They unite for the Mega Legends attack.

The other Mega Men (Mega Mans?) are more detailed than the original Mega Man, in the middle.

The most defining feature of the original Mega Man is that he has no details. Face. Blue suit. Blaster. Done.

The new Nendoroid Mega Man figure does a good job of both interpreting the original Mega Man sprite, and adding to the confusion of “what the hell does Mega Man really look like?” 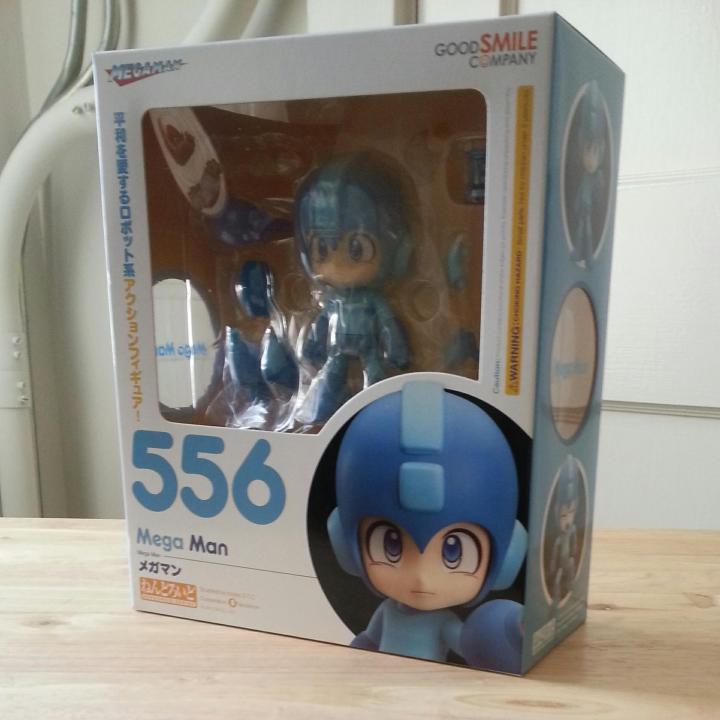 He came wearing a little transparent plastic skirt, which is very post-modern, although not an outfit I ever remember Mega Man wearing.

This box comes with a ton of pieces. Three faces. Multiple hands, blasters, and bullets. Two pairs of legs. A stand. And an E-tank. It’s a very nice figure, with lots of posable details. There are about four or five really detailed poses you can put him into, and whatever else you want to try and do. 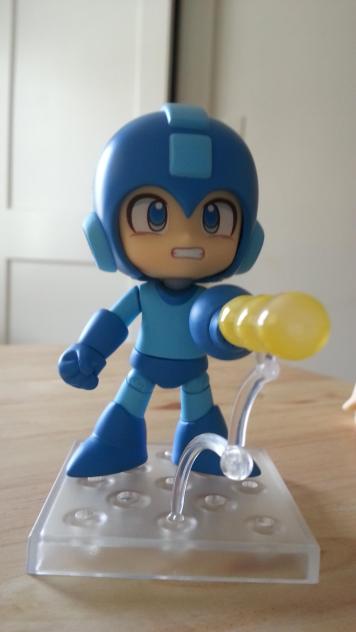 He runs, he shoots, he jumps. He hangs out with friends.

His face has a bright-eyed anime look, which is a good fit for Mega Man and the Nendoroid series in general. But what’s under the helmet? The Nendoroid figure doesn’t have hair hiding underneath the helmet. Instead, he looks like Robocop without his helmet.

I was surprised to find little ears underneath Mega Man’s helmet. But looking again at the tiny sprite from Mega Man 2, there are about three pale pixels peeking out from his tousled hair. It could be an ear. It’s nice to know that Mega Man can hear me when I talk to him.

Or maybe he has ears because Nendoroid knows how fragile the earpieces of his helmet are. I broke the right one the third time I took it apart to change faces.

His little ear poked out after this. Battle damage Mega Man, after Metal Man’s blade cut a little too close for comfort. 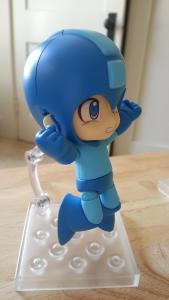 So Mega Man got ready to fix himself with his super glue attachment. Was there ever a Glue Man? There should have been.

Repaired, Mega Man joined Mega Man, hoping to be a part of the next Final Smash in Smash Bros. 5. 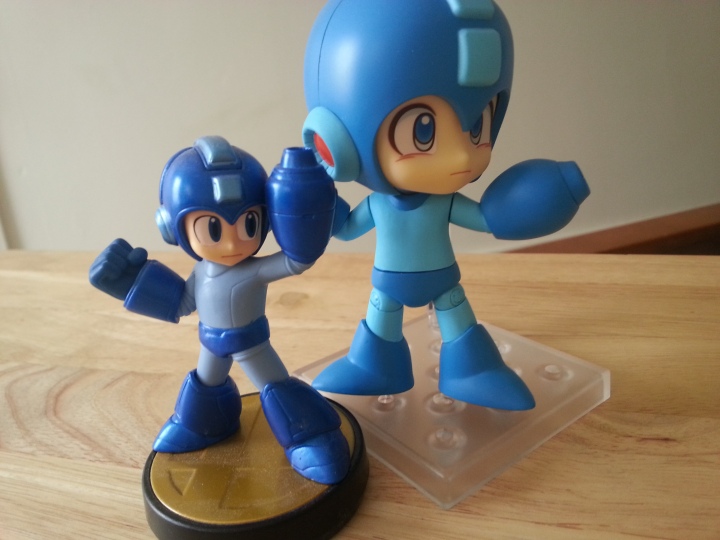 Mega Man is a robot, so like an iPhone or a Hollywood celebrity, he goes through little visual refinements with every new iteration. No one uses those old models anymore, the ones from the bad box art or the cheap 80s cartoon. These Mega Mans look into the future, wondering what they will look like next, and what dangers they may have to face as they continue to fight for the safety of humans and robots alike.