Last night’s screening for the Oscar-nominated short films (animated and live-action) brought in a surprisingly large crowd at the small Wilton Town Hall Theatre on a subzero Saturday night.

Sitting through all the animated and live-action shorts takes endurance. Not only does the entire run-time take over three hours, but this year’s animated shorts are some of the most brutal, devastating pieces of film I’ve seen in a long time.

There were six walkouts.

Two people left after the animated portion concluded, maybe before, presumably to sit in a dark corner, quietly rocking back and forth, and re-evaluate all their life choices. Another two couples left during the very last live-action short, “Day One,” a short film in which Feda, a translator with gorgeous hair, works with the U.S. military in the middle east. When a woman in a village goes into labor, and the baby is emerging sideways, Feda must assist with the labor. The male doctor will not touch the woman in labor.

The baby is stillborn. To remove it, and save the mother’s life, Feda is instructed to saw the baby’s arm off and remove it in pieces.

This scene is very similar to the opening of David Mitchell’s The Thousand Autumns of Jacob de Zoet, but is harrowing to witness on film. One of the Army men gives Feda a pocket knife to perform the procedure. (My thought: Doesn’t he have something serrated?) This is when the two couples left.

Up to this point, we have sat through, in live-action and animated forms, animal cruelty, a man being stabbed in the taint, a child shot during the Kosovo War, a spaceship explosion, and the destruction of the entire human race. Yet during this short, about six minutes before the end of the marathon, four people walked out.

I found that strange, but it helped illustrated how intense these short films can be. Some people just can’t take it. And because of that, they missed the baby’s arm move. Yes, the baby is alive and survives the birth.

I’ve wanted to walk out of plenty of movies before — Birdman, A Girl Walks Home Alone at Night — and I always regret staying. More power to these quitters for being fine not knowing what happened. But the films I storm out of were 90+ minutes, and I wanted to walk out about 30-45 minutes in, saving myself a ton of time and silent rage at the screen. These people left with literally 4 minutes left. And the short films show you how long they are before each one, so it’s not like they didn’t know. I wonder if they went and told their friends about that horrible baby-sawing movie…

None of the live-action movies did much for me. All of them relied on hokey sentimentality. Even “Day One” feels the need to show us Feda’s internal conflict about not having children of her own, yet leaves her holding a baby in the end. “Shok,” about two boys during the Kosovo War, also includes  a framing story that only serves to jerk out a few more tears.

The worst of the bunch is “Stutterer,” twee tripe about a man with a chronic stammer. He makes typefaces, loves words, but can’t talk! The tragedy. The irony. He teaches himself sign language so that he can pretend to be deaf when people ask him for directions. He is in a six-month long-distance relationship with a girl who is visiting London, where he lives. But, even though it’s been six months, he hasn’t told her that he has this chronic speech problem. They meet at the very end, and it turns out she is deaf. They can communicate after all. This is a lovely story in that he found someone who is as equally shady and disingenuous about online communication as himself. Seriously, neither of them revealed this after six months? What else are they being dishonest about?

I enjoyed “Ave Maria” although I didn’t quite understand the religious dynamics at play. My favorite would be the German short film “Alles Wird Gut” or “Everything Will Be Okay” although I would have appreciated a little more context about why the main character decides to kidnap his own daughter. There is a scene in a hotel room at the end of this piece that is incredibly intense.

The animated shorts are much stronger because they resist the urge to curve toward the hokey sentimental endings that the live action ones do, “Alles Wird Gut” being the exception. “Bear Story,” about a bear kidnapped to perform in the circus, is the most sentimental of the bunch, but the animation, which looks like tin animals performing in a wind-up nickelodeon, is stunning. “Prologue,” the one in which a naked man is stabbed in the taint, is the weakest, despite having both peen and well-choreographed swordplay on display. Its style look like moving pencil sketches, but I found the facial expressions ugly and unappealing, and the story, too, attempts sentimentality and fails, which I think is worse than actually succeeding.

The Disney/Pixar entry, “Sanjay’s Super Team,” best summed up as Hinduism meets the Powerpuff Girls, is exactly what you’d expect from Disney/Pixar: stunning animation, heartwarming ending. This is the safest film of the bunch, but the bright colors are enchanting. 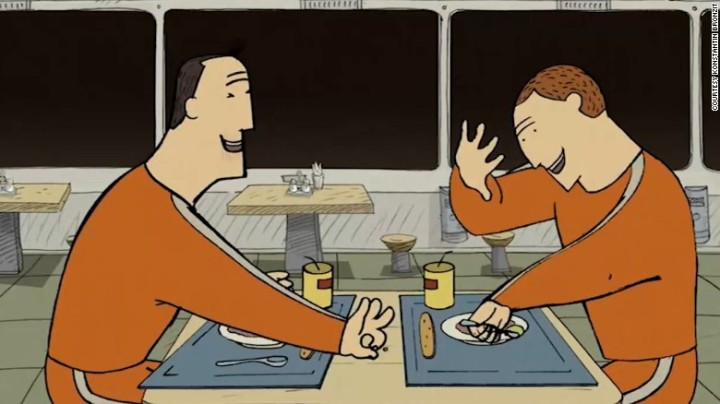 The two strongest entries are the haunting “We Can’t Live without the Cosmos” a story about two lifelong friends (maybe brothers, I couldn’t tell) who are training to be cosmonauts in Russia. What’s colder than Russia? Space. This is an affecting piece of film, with clean, expressive animation, that conveys the sharp pain of loss and loneliness without speaking a single word. Highly recommended.

If it wasn’t for the final entry, “World of Tomorrow,” “Cosmos” would be my pick to win. But “World of Tomorrow” is an absolute masterpiece. Although similar to “Cosmos,” — both are depressing, involve space, loneliness, and memory — “World of Tomorrow” is as verbose as “Cosmos” is silence. The sheer amount of speech and noise is disconcerting, which puts you at unease almost immediately, and the feeling sinks in and solidifies as the story continues.

“World of Tomorrow” tells the story of Emily and her future clone. Present-day Emily is a child, and speaks so accurately childlike, I wonder if they used an actual small child to do her voice. She provides a fascinating view point to this futuristic, speculative sci-fi misery that unfolds. What price do we pay for eternal life? What are the true dangers of time travel? Can clones find love with robots? Emily is too young to understand any of this, and maybe that’s for the best. This film scrapes at your soul. It’s absurd and tragic, and I can’t put my feelings about this one into words. It’s viewable online and on Netflix so go watch it right now.