A video game forces me to make a difficult decision between maturity and idealism.

Bravely Second is a beautiful JRPG for the Nintendo 3DS. The “Bravely” series, which began with Bravely Default, serves as a spiritual successor to the earlier Final Fantasy games. A party of four – Yew, Edea, Magnolia, and Tiz – fight to save the crystals and the world.

The game has a fantasy atmosphere and a combat system based around different jobs like Wizard, Fencer, Bishop, and Catmancer. Yes, Catmancer. Its fantastic writing is both serious and silly, allowing for emotional moments and hilarious ones. One character’s goal is to defeat an alien race known as the Ba’al. She has dubbed herself a “Ba’al Buster.” The twelve-year old in me named her spear the “Ba’al Scratcher.”

This sequel continues to modernize a stale genre. The frequency of random battles is customizable. Difficulty can be changed on the fly. And every line is voice acted with top-notch actors.

Bravely Second also forces you to make difficult moral decisions. They don’t bear any impact on the overall plot, but that doesn’t make them any less thought-provoking. The second one I have encountered vexed me for a two days, and I’m still thinking about it.

Edea’s master, Kamiizumi, asks her to deliver a letter to a pupil: the young Gho Gettar. Young Gho, a bright student with an aptitude for magic, was recruited by the Power Betterment Office. He thought he was getting an exciting new job, but his employer has put him to work doing manual labor in the mill. He is a literal cog in a machine. “Despite all my learning, I’ve been made a fool,” complains poor Gho.

What Gho really wants is to summon a god no one has summoned before. He get the opportunity. A summoner named Mephilia appears, and extolls Gho’s summoning skills. Mephilia tells Edea, “Humans bound and battered by the responsibilities of reality are little more than dull little pigs.” Gho abandons his job and travels with Mephilia to the Miasma Woods.

The manager tells Edea they assign recruits to the toughest job to “build character.” He says, “You have to show these clever clog types what real work is, or you’ll never get anything out of them.” If Gho doesn’t return to his job, he will be fired.

Edea has a choice: let Gho remain in the woods, or bring him back to his job.

My first choice was to let Gho stay in the woods. He needs to follow his dream, I thought. Sometimes I’m a romantic and an idealist. Here’s a little bit of what Edea has to say when I make this choice. 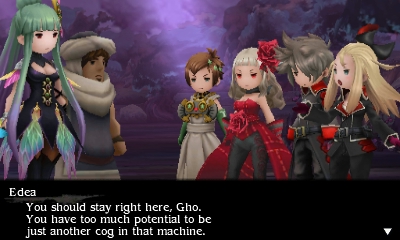 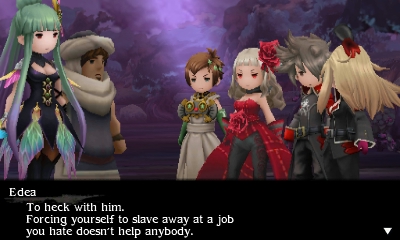 Master Kamiizumi, who had been incapacitated in a kitten attack (don’t ask), appears to challenge Edea, and he doesn’t mince words. 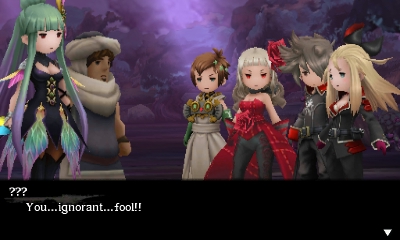 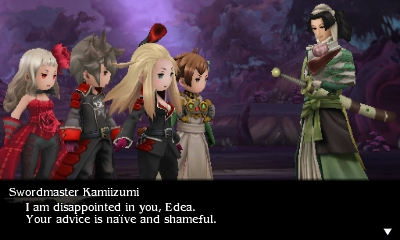 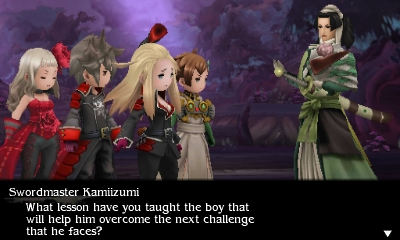 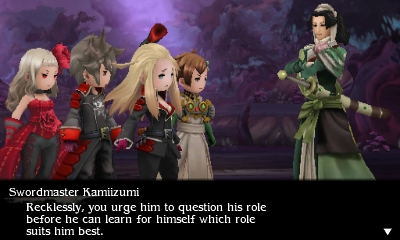 I changed my mind. I closed the system, and I reloaded my save.

The next time I decided to bring Gho back. Master Kamiizumi doesn’t appear. Instead, Mephelia flips out, and we have to battle her for the right to take Gho back to his job. 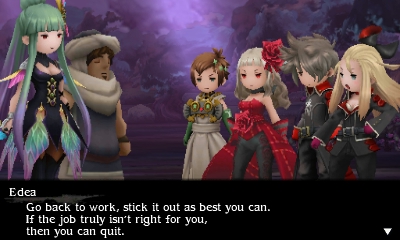 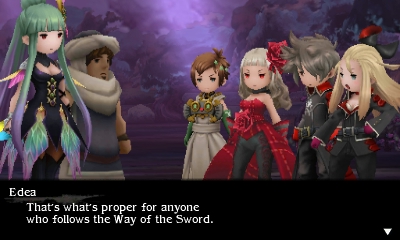 Gho returns to his job, and quickly receives a promotion. 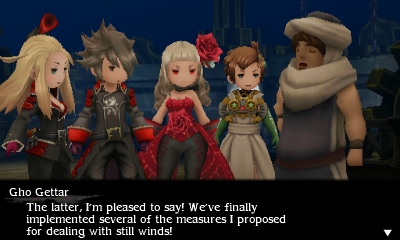 It all works out!

But I was curious to see what would have happened if I had chosen to let him stay in the woods instead. So I reloaded my save yet again. Gho is happy there, too. “It’s practically too good to be true!” he says.

Gho is happy no matter the decision. But me, I’m uneasy with both paths.

One of the main reasons I initially wanted Gho to realize his dream in the woods is because his employer tricked him. They recruited him for one job, then gave him another. The argument that Gho needs to return to do the job he promised to do is invalid. His employer didn’t give him the job he thought he was signing up for.

With the prescience video games allow, returning Gho to the factory works out better. Leaving him in the woods, we don’t see Gho summon the god he wishes to. Yes, he’s getting there, but he hasn’t done it yet. Troubling is Mephilia’s statement: “Finally, I can fulfill the promise to my own master…”

What this conflict boils down to for Gho is which master to follow: gentlemanly Kamiizumi or selfish Mephilia. Kamiizumi has Gho’s best interests in mind. Mephilia only has her own.

But both are those facts are only apparent after Edea makes her decision. Until that point, Edea’s central conflict is whether to choose youthful ideology or mature responsibility. I think that romance and practicality are mutually exclusive opposites. You can’t have one with the other.

Perhaps my personal dilemma over Gho Gettar’s crisis is that he must choose romance or practicality forever. For him, there is no going back. The video game might let you see each path before choosing, but the drawback is that once you choose, that’s it. In real life, we can alternate between being romantic and practical, without feeling bound to either path.

Deciding which to be and when is the hard part.

One thought on “Second Guessing”