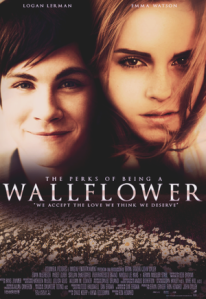 The Perks of Being a Wallflower movie, with Emma Watson, recently got smacked with an R rating, which is being appealed.

Man, did I love this book when I was in high school. I bought it when it first came out, and still have that copy today. Actually, I think I have a different copy because some bitch borrowed it and kept it, but that’s not the point.

I recently re-read it and was surprised by 1. how much I remembered after 10 years and 2. how much I completely forgot.

Now I see why this book is so popular. It has pretty much every single YA trope in it: drugs, first kiss, sexual abuse, dealing with sexuality, teen pregnancy, abortion, distant parents, making friends, bullying, suicide, and melting your hand with molten silver. Okay, that last one might be from Johnny Tremain, but all the rest is in there.

I think the reason I forgot so much of it, was that, when I first read the book at sixteen, I just chose the parts I identified with and pretty much discarded the rest. Kind of like picking the marshmallows out of a bowl of Lucky Charms and tossing the cereal. Because I wasn’t into drugs as a teenager, I didn’t remember that they were high half the time in the book.

That whole pick-and-choose method isn’t part of my reading strategy anymore. I don’t know when that changed. As a result, I didn’t care for the book as much upon re-reading it. And I found the narrator extremely tiring. Tiring to the extent of reading A Curious Incident of the Dog in the Night-Time. But that kid had autism, so he had an excuse for his repetitiveness and emotional outbursts. As far as I know, “Charlie” in Perks has no excuse, so he was annoying in addition to tiring.

Plus, the whole thing came across as a little false, like an adult writing letters pretending to be a teenager (which is exactly what the book really is.) Charlie talks about how he needs to learn grammar, punctuation, and spelling, but it’s pretty much flawless. That may seem like a nitpick, but it’s hard to think you’re reading letters from a teenager when they’re written in perfect English. Most adults don’t write that well.

Despite Emma Watson being in the movie, I doubt I’ll see it in theaters. Maybe when it hits the Redbox.

2 thoughts on “The Perks of Re-Reading a Book”